PTI Hijacked or not - Make your own deductions ...

- May 14, 2013
Yes PTI was hijacked, not just now near the elections. It was hijacked before it got the momentum. Establishment is involved in the success of PTI. This was the only way they could diffuse public anger. 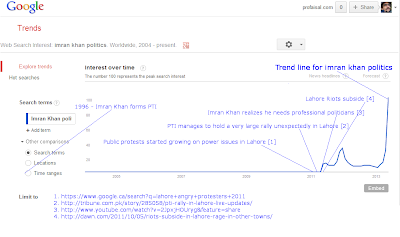 I have done some analysis here.
Trend of Imran Khan politics

In April 2011, public protests on power crisis got started growing in Lahore.

In Oct 2011, PTI manages to hold a very large rally unexpectedly in Lahore.

This is the same time, Imran Khan realizes that he needed all the professional politicians in order to gain power. PTI loses its moral grounds.

In Oct, riots subside in Lahore.

Aug/Sept. Muhammad Zubair (Zubair Umar) brother of Asad Umar (Ex CFO IBM pakistan) joins PML(N)
Both brothers are higher ups in these parties.
(I am not sure but perhaps these brothers are sons of the same Maj-Gen Umar named in Hamood ur Rehman commission)

After that it was a marketing campaign.See the trend.

You can also see this from absence of PTI higher ups in post election protest rallies. Ibrar ul Haq running the rallies, because he is really angry. PML(N) and Police both want to diffuse these rallies, unlike the prior huge rallies.
Politics - سیاسیات

Popular posts from this blog